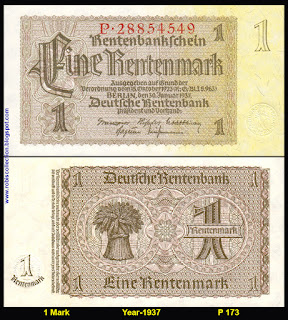 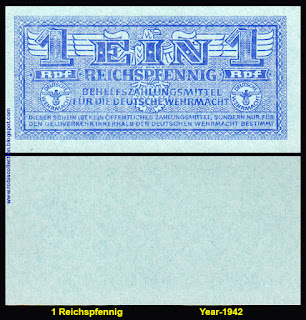 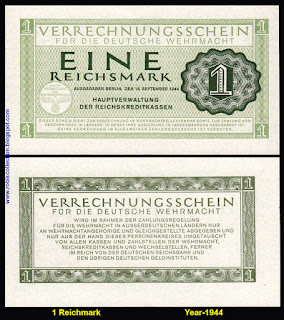 These Wehrmacht military scrip notes were used to pay Nazi troops in the final months of World War II.  The notes are dated September 15, 1944.  Soldiers were paid in military scrip while in transit. When a soldier arrived at his post the notes could be converted to the local currency or occupation notes.  The front includes an Eagle holding a Swastika.  The back lists regulations about the note.  This is an important and scarce pieces of German military history. 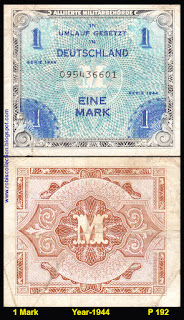 The Allied Military currency for Germany was created by the United States for use in Germany after the defeat of the Nazis. The notes are dated 1944 and have a simple design, with the denomination and legends in German on the front and a large letter “M” for  Mark, on the back.  As the Soviet Union participated in the occupation of Germany, they demanded that they too print a portion of the notes.  After great debate, the United States gave into the Soviet demand, and provided them with glass plates, inks, paper and specimen notes.  The Soviets then proceeded to print vast quantities of the notes, without regard to the wishes of the other allies, fueling inflation in the war-torn country.  There are however a few very minor differences that distinguish the United States issues and the Soviet issues.  The United States issues were printed by Forbes Lithograph Manufacturing Company (Forbes Printing) in Massachusetts, and contain secret mark:  a tiny letter “F” hidden in the scrollwork.  The plates provided to the Soviets did not have that “F”, so it is lacking on the Soviet issues.  The Soviets did not have serial numbering equipment capable to print nine-digit number, so they combined a three digit and a six-digit block for their printings, which causes a slight gap between the third and forth digits.  Forbes used a dash for the first digit to signify a replacement note.  The samples provided the Soviets were replacement notes, so initially all the Soviet issues had a dash for the first digit of the serial number – until they printed so many notes that they needed all 9 digits.  In 1948 the Allied Military Currency was withdrawn and replaced with the currency of West Germany and East Germany.